The 2019 Frankfurt auto show in September will see Mercedes-Benz introduce plug-in hybrid versions of its smallest, most affordable models: the A-Class and B-Class. Both are intended for the European market.

The 250e suffix denotes compact Mercedes models with plug-in hybrid power. The A250e and the B250e both rely on a turbocharged, 1.3-liter four-cylinder engine and a motor that draws electricity from a 330-pound, 15.6-kilowatt-hour lithium-ion battery pack. The two power sources deliver 218 horsepower and 331 pound-feet of torque to the front wheels through an eight-speed dual-clutch automatic transmission. Mercedes quote an electric-only range of about 37 miles at up to 87 mph.

When the two parts of the powertrain work simultaneously, the A250e reaches 62 mph from a stop in 6.6 seconds, while the larger, more family-focused B250e performs the same task in 6.8.

Charging the battery from 10 to 100 percent takes an hour and 45 minutes when using an alternating current (AC) charger. Motorists with access to a direct current (DC) charger need to wait for 25 minutes to charge the pack from 10 to 80 percent of its capacity. The MBUX infotainment system finds charging stations along a given route, or in the vicinity of the final destination, and steering wheel-mounted paddles let the driver choose one of five brake regeneration levels that channel electricity into the battery pack while driving.

Mercedes went to significant lengths to integrate the components of the hybrid powertrain as neatly as possible. The turbo-four exhales through an exhaust system with an outlet right under the passenger compartment, not at the car's rear end. The silencer is sandwiched into the transmission tunnel, a layout which frees up space for the fuel tank over the rear axle, and in turn lets the battery pack settle under the rear seats. Mercedes explained its compacts lose only a small amount of trunk space by going hybrid, but it hasn't released specific figures yet.

Mercedes-Benz isn't currently planning on selling the A250e and the B250e in the United States since the models they're based on aren't available here, and won't be in the foreseeable future. The powertrain could sail across the ocean under different sheet metal, however. If it fits in the A-Class hatchback and in the B-Class, it's possible it could fit in other cars built on the platform, like the A-Class sedan, CLA, next-generation GLA, and the new GLB. 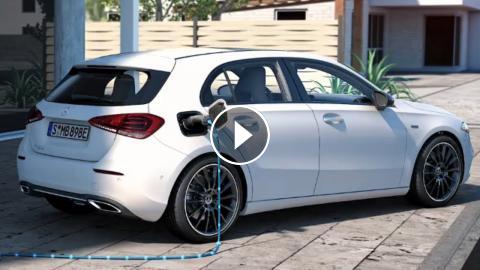