Launched in 2012 at the beginning of the electric vehicle craze, the Renault Zoe supermini slowly established itself as one of Europe’s favorite electric cars.

Starting off its career with a tiny battery and range, the Zoe evolved so much that it is now one of the heavy-lifters of the EV segment.

The second generation of the Zoe was presented in June 2019, seven years after the debut of the nameplate. Unlike that first version, it offers the biggest battery to date – and subsequently the most range – technological improvements and minor visual tweaks meant to upgrade its looks.
The hatchback is built on the same platform as before, hence it has the exact same dimensions. That means 4,084 mm long, 1,730 mm wide and 1,562 mm high.

Its lines have been revised though, and that is most visible at the front: there’s the reshaped bonnet, the wider and more sculpted bumper that now includes chrome inserts in the grill and around the fog lights, and a new interpretation of the Renault diamond logo.

Unlike other electric cars on the market, the Zoe hides its charging port in the nose, right under the logo, where the type 2 AC plug and the connector for the new optional 50 kW fast charger.are fitted. The badge now comes with a holographic design that makes it look like a 3D element.

LED lights are offered as standard now, for both the front and rear. The front ones are fitted with chrome inserts and said to provide 75 percent more light than equivalent halogen units, and the rear ones now include dynamic turn indicators.
Power for the new Zoe comes from a 52 kWh battery, the largest fitted so far in the range. Despite being capable of holding more electricity though, it is not in any way bigger in size than the 40 kWh used until now, meaning interior space remains the same.

Being more capable translates into 30 percent more range than the version it replaces, or 242 miles (390 km) as revealed under WLTP testing.

For the new car there is now the option to recharge the battery using a 50 kW DC charging option that provides 180 miles of range per hour. The usual charging method, a 7kW Wallbox, needs nearly nine and a half hours to get the cells to full capacity.

Taking the electricity and turning it into wheel motion is the car’s electric motor. Two variants are offered by Renault, an entry-level 107 hp unit and a brand new 134 hp version for the GT Line. 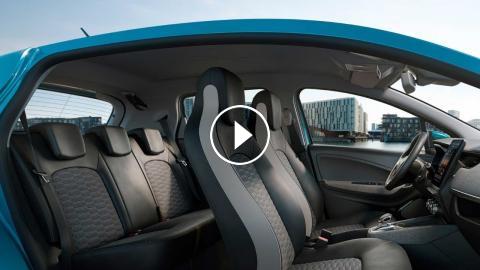 2020 Renault Zoe Unveiled With Bigger Battery, More Tech https://youtu.be/WbhQguWtNb8Launched in 2012 at the beginning of the electric vehicle craze, ...