Depending on where you live, Mitsubishi’s compact crossover goes by the name of ASX, RVR or Outlander Sport. The third generation has been around since way back in 2010, but the images attached here are not showing the fourth-gen, even though the model has gone through some significant styling changes. It now adopts Mitsu’s latest Dynamic Shield front design language and that means the model has been brought in line with the Eclipse Cross.

LED headlights and taillights are also part of the 2020 model year update, with new colors such as Red Diamond, Sunshine Orange, and Oak Brown being added to the range. Mitsubishi also designed a fresh rear skid plate finished in silver to make the ASX seem a bit more rugged. A similar change has been made at the front bumper to complete the look.
Stepping inside the cabin, the size of the touchscreen for the infotainment system has increased from seven to eight inches. Go for the higher-spec models and you get Tom Tom navigation with real-time traffic information. Mitsubishi will soon add a smartphone app to display the vehicle’s odometer, speedometer, warning lamp, remaining info, and other info.

In Europe, the 2020 Mitsubishi ASX comes with a naturally aspirated 2.0-liter gasoline engine hooked up as standard to a five-speed manual gearbox. At an additional cost, there’s also a continuously variable transmission (CVT) with a sports mode mimicking six physical gears. The Japanese marque has not provided output details for the engine, but we should mention in the Outlander it’s good for 148 horsepower and 144 pound-feet (195 Newton-meters) of torque.

Interestingly, the press release doesn’t say anything about the diesel, which could mean the 1.6-liter unit has been dropped. Both front- and all-wheel-drive versions of the updated ASX will be available in Europe.

We’ll see the revised Mitsubishi ASX beginning with March 5 when the 2019 Geneva Motor Show will open its doors for its 89th edition. The U.S.-spec 2020 Outlander Sport could follow late next month at the New York Auto Show, unless we’ll have to wait until the second half of November for the Los Angeles Auto Show. 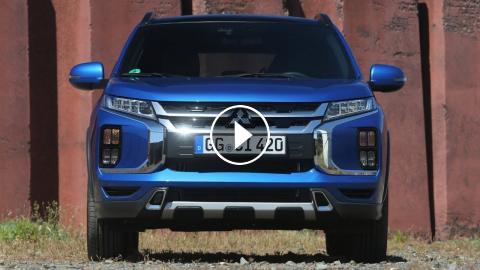 2020 Mitsubishi ASX SUV Unveiled https://youtu.be/HaDE_tH9vNQDepending on where you live, Mitsubishi’s compact crossover goes by the name of ASX, RVR ...