So we’ve got 6 different lenses here with similar focal lengths, but one thing you’ll notice is that they don’t all look the same.
As you can see, lined up from smallest to largest, each lens has it’s own style and shape.

On the end here we've got the smallest of the lot, the 40mm pancake. It’s got great build quality and packs a lot in a small package. Moving up we have the old and the new nifty 50. The old is very light weight and also very plasticky where as the new STM version is much better and feels very well built. After that we’ve got the Canon 50mm 1.4 which has been around for quite a while and is kind of a step up in terms of build quality from the nifty 50’s, but could definitely do with an update.

And then we move onto the more professional lenses out the lot, the Canon 50mm 1.2 and the Sigma 50mm 1.4. And you can definitely tell they’re built for a pro environment. They’re both really quite heavy and feel very solidly built.

In terms of the focus rings, to me the Sigma has the best out of the lot, followed closely by the Canon 50mm 1.2 and the newer 50mm stm. Now one thing to note is that the STM lenses, both the 40 and 50, have a focus by wire system, which is a little different to the other lenses.

So as you can probably tell, all of these lenses bar the old nifty 50 have great build quality and which one you choose is going to come down to how you like to take your photos. If you’re looking for a light weight lens that you can walk around all day with, I’d look for the 40 stm or one of the 50 1.8s. If you’re looking for a lens that’s a little tougher I’d go for the old 50 1.4 and if you’re in a professioanl environment I’d go for either the 50mm 1.2 or the Sigma 50mm 1.4.

So let’s quickly talk about the focal length. 50mm is a fantastic normal field of view on a full frame body like the 5d or 6d and will work in most environemnts. On a crop sensor body like my Canon 70d here, it converts to around 80mm which turns it into a perfect focal length for portraits.

Now all of these lenses will produce the same field of view apart from out little 40mm friend here on the end. As you can see, it’s not a huge difference in terms of field of view, but I’ve found so many times that having that slightly wider focal length of 40mm has saved me in smaller rooms.

So let's talk about bokeh, or the out of focus area behind your subject. Now all of theses lenses have the ability to create really quite a shallow depth of field.

As you would expect, because of it’s slower maximum aperture of f2.8 and it’s wider focal length, the 40mm STM won’t give you that incredibly dreamy look like the other lenses, but it still doesn’t perform badly.

In terms of the roundness of the bokeh, The old nifty 50 only has 5 aperture blades, compared to all of these other lenses which have at least 8. As you can see, that’ll mean you’re bokeh circles will look a little bit more like pentagons instead.

Overall I found that the Sigma 50 and the new 50 stm were actually the sharpest when shooting wide open, followed by the 50 1.2 and the 40 stm. The 50 1.4 and the old nifty 50 weren’t as sharp at their max apertures, but still look really quite nice with that very shallow depth of field.

So let's talk about autofocus quickly. Now it’s long been known that 50mm lenses aren’t the fastest focusing lenses around. And most of these lenses here back that up.

That is apart from the newer STM lenses the 40mm and the 50mm. I consistenly found that these two lenses, which both come in at under $200 were easily the fastest lenses of the group. Not only were they zippy with their autofocus, they were also the quietest of the lot.

The Sigma 50 1.4 and the Canon 50 1.2 aren’t bad performers either, but for their price, you’d probably want them to perform a little better. The Canon 50 1.4 wasn’t too bad but definitely needs an update and our poor little friend the old nifty 50, did struggle in the autofocus field. 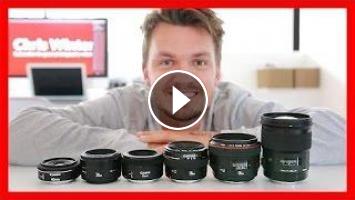