admin
We've talked about it endlessly since its official unveiling last September, and now we've finally got one on our wrist. It's time to share thoughts from our two-week Apple Watch review period, and we've brought the biggest iOS expert we've got onto the airwaves to help us do just that (and talk a little iPhone 6s rumors in the process).
Technology is more than Apple, of course, and despite our early broadcast time this week we've got plenty of hypermatter for the news reactor. From "the last version of Windows" to the Galaxy S6 Active to an Android-powered pen –with real ink and everything!– we've got a lot to stick in your ears and not a lot of time to do it.
So let's quit pussyfooting around and get to podcasting. Pocketnow Weekly 148 is rolling out of the Podcast Assembly Building on its slow crawl to that big Blue Yeti launchpad on the horizon. Watch the video broadcast at 12:00pm Eastern on May 13 (click here for your local time), or check out the high-quality audio version when it drops later this week. And don't forget to shoot your listener mail to podcast [AT] pocketnow [DOT] com for a shot at getting your question read aloud on the air!
Pocketnow Weekly 148
Recording Date
May 13, 2015
Hosts
Michael Fisher
Stephen Schenck
Jaime Rivera
Producer
Jules Wang
Podcast Rundown
Sponsor
(00:02:00)
Challenge yourself to learn something new with a free 10-day trial to lynda.com! It’s is used by millions of people around the world and has over 3,000 courses on topics like web development, photography, visual design and business, as well as software training like Excel, WordPress, and Photoshop.  All of their courses are taught by experts and new courses are added to the site every week.  Whether you want to invest in a new hobby, ask your boss for a raise, find a new job or improve upon your current job skills in 2015; lynda.com has something for everyone!
Announcement
(00:03:00)
Win this LG G3 from Pocketnow!
News
(00:05:00)
What Windows 10 means for the future of Windows branding
Microsoft prepares new Windows 10 for phones update
Could these be the first pictures of the Galaxy S6 Active?
Samsung Galaxy Tab S2 render shows possible Galaxy S6-inspired tablet
New Moto X camera upgrades could include arrival of OIS
Livescribe 3 smartpen and Livescribe+ for Android review
iPhone 6s predictions claim new metal covers, camera upgrades and more 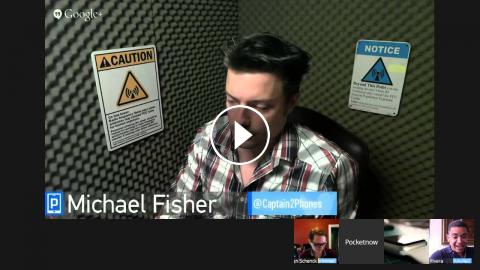 We've talked about it endlessly since its official unveiling last September, and now we've finally got one on our wrist. It's time to share thoughts f...