admin
For those of us in the US, the LG G4 is the last big flagship smartphone launch before the fall, so you better believe we're milking it. We talked LG G4 first impressions with Florence Ion, Joshua Vergara and Dom Esposito from a boat last week, and while today's episode of the Pocketnow Weekly podcast may lack the nautical theme, it's got just as much guest-star power. Joining us for episode 147 are Android Central's Phil Nickinson and Mobile Geeks' Nicole Scott to help us dissect LG's curvy leather wonder in an on-air LG G4 review!
Of course that's not all we're bringing to the table: the Galaxy Note 5 is gonna be a thing come September, and the first rumors are floating to the surface right about on schedule. Add to that a bezel-free ZTE phone, BlackBerry's return to T-Mobile and the usual happy-sad Windows Phone speculation, and you've got yourself a helluva podcast. Assuming Google Hangout doesn't gum it all up, of course.
Pocketnow Weekly 147 is back from the body shop with a fresh coat of paint covering up a whole lot of Bondo, so let's put the key in the ignition and see if we can't get this motor runnin'. Join us for the live video broadcast at 12:30pm Eastern on May 8 (click here for your local time), or check out the high-quality audio version uploaded later on if you miss the live window. And don't forget to shoot your questions to podcast [AT] pocketnow [DOT] com for a shot at getting your question read aloud on the air!
Pocketnow Weekly 147
Recording Date
April 8, 2015
Hosts
Michael Fisher
Stephen Schenck
Phil Nickinson (Android Central)
Nicole Scott (Mobile Geeks)
Producer
Jules Wang
Podcast Rundown
Sponsor
(00:02:00)
Challenge yourself to learn something new with a free 10-day trial to lynda.com! It’s is used by millions of people around the world and has over 3,000 courses on topics like web development, photography, visual design and business, as well as software training like Excel, WordPress, and Photoshop.  All of their courses are taught by experts and new courses are added to the site every week.  Whether you want to invest in a new hobby, ask your boss for a raise, find a new job or improve upon your current job skills in 2015; lynda.com has something for everyone!
Gadgets in Hand: LG G4
(00:05:00)
It's been the talk of the broadcast for four weeks running, but we've finally got LG G4 review devices in hand, an LG G4 review posted, and we're ready to take your questions live on the air! If you're watching the show live, use the Q&A function in Google Hangouts to submit your most burning questions and we'll do our best to answer them!
Context: LG G4 review (Pocketnow) | LG G4 hub (Android Central) | LG G4 hands-on (Mobile Geeks)
More: LG opens entries for free US LG G4 trial program | LG G4c leak claims to reveal specs and price
News
(00:50:00)
Devices
Galaxy Note 5 rumors suggest different direction for Edge version
Galaxy S6 shipping with different camera sensors
Xperia Z4 Compact coming later this month?
Bezel-less ZTE Nubia Z9 announced with touch-sensitive frame
Massive leak uncovers the LG Lancet Windows Phone for Verizon
T-Mobile warms back up to BlackBerry, welcoming Classic into its stores
New source weighs in on Microsoft Lumia flagship rumors (but don't expect them to run Windows 10 this summer)
Developments
Android could finally be getting back a la carte app permissions
Qualcomm exec discusses "rubbish" Snapdragon 810 overheating rumors
Google I/O schedule teases voice-controlled apps, Nearby proximity service
Listener Mail
(01:15:00)
E-mailed submissions from Daniel Kruger and Safi Uzzaman
•
See you at 12:30p ET! 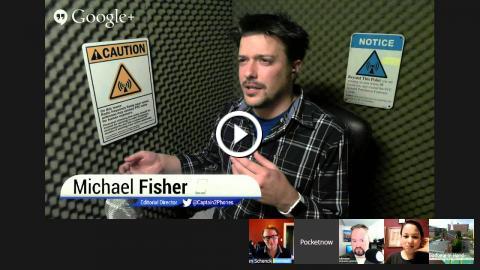 For those of us in the US, the LG G4 is the last big flagship smartphone launch before the fall, so you better believe we're milking it. We talked LG ...