admin
Arianna Huffington stops by the Google London to talk with Yonca Brunini and the office about "Thrive". You can find more info on Google Books:

In April 2007, after years of around-the-clock work to launch and build The Huffington Post, Arianna Huffington collapsed from exhaustion and lack of sleep, injuring her eye and breaking her cheekbone. It was a bloody wake-up call, forcing her to ask herself: is this what success looks like? Is this the life I wanted? In terms of the traditional measures of success, which almost exclusively emphasize money and power, she was very successful. But she was not living a successful life by any sane definition. Arianna knew something had to radically change.

Since then, Arianna has dramatically altered the way she lives. Her new book Thrive: The Third Metric to Redefining Success and Creating a Life of Well-Being, Wisdom, and Wonder (on sale March 25) is a call to arms to redefine how we measure success both in our work and our personal lives.

Inspired by her 2013 commencement speech at Smith College and drawing on her experiences as a thought leader and working mother-of-two, Huffington shows how instead of settling for breaking through glass ceilings in broken corporate systems, we can change the system altogether by redefining what success is and what we value the most. Her speech touched a nerve and was quickly followed by conferences in New York, London, Munich and Hawaii, which received international attention and acclaim. The goal of these Third Metric conferences—including the next round this spring in New York, Washington, D.C., and Los Angeles—is to look beyond money and power to include a third metric that recognizes the importance of well-being, wisdom, wonder, compassion and giving.

The way we currently define success leads to burnout, overwork, lack of sleep and being hyper-connected to technology—all to the detriment of our health, relationships, families, and even our careers. It is unsustainable for women, men, our communities, our nation and our planet. We need a revolution in our lives—one that redefines what it means to be successful. Thrive is a vital next step in that conversation. 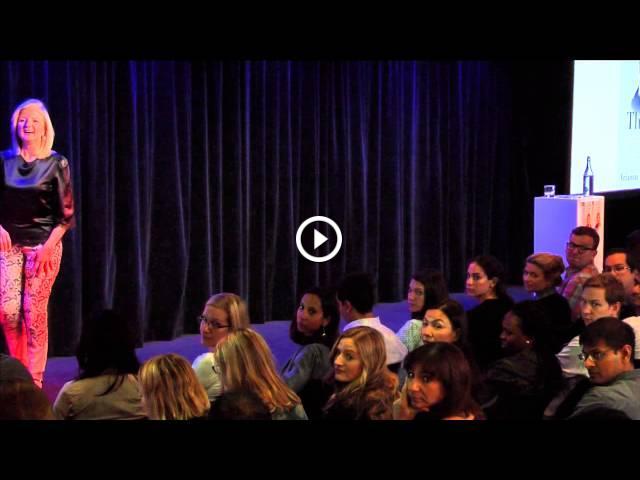 Arianna Huffington stops by the Google London to talk with Yonca Brunini and the office about "Thrive". You can find more info on Google Boo...