Galaxy Note 7 may be shut down, iPhones explode too & more - Pocketnow Daily

admin
Stories:
- Moto 360 Sport price dips to $140 at Amazon and Best Buy, but likely not for long
- It’s alive: HTC Halfbeak Android Wear watch resurfaces in pre-release prototype form
- HP Elite x3 at Microsoft Stores this week
- Two iPhone 6 Plus explosions in one week, Apple responds to at least one
- Galaxy Note 7 production halted for now as AT&T ends exchanges for new units
Watch today's Pocketnow Daily as we talk about the recent deals for the Moto 360 Sport on Amazon. Then we discuss the rumored HTC watch that could be running Android Wear. The HP Elite x3 follows as Microsoft has just begun to offer it in retail. Then we talk explosions, but not from the device you think, as this time it's the iPhone 6 Plus, and we didn't forget an "s." We end today's show with other explosive news as Samsung will apparently cancel the Galaxy Note 7
All this and more after the break.
Subscribe:
About us:
Pocketnow has been a key source of mobile technology news and reviews since its establishment in 2000. With offices on three continents, Pocketnow offers round-the-clock coverage of the mobile technology landscape, from smartphones to tablets to wearables. We aim to be your number-one source for mobile tech news, reviews, comparisons, and commentary. If you love mobile as much as we do, be sure to subscribe!
Follow us:

Galaxy Note 7 may be shut down, iPhones explode too & more - Pocketnow Daily 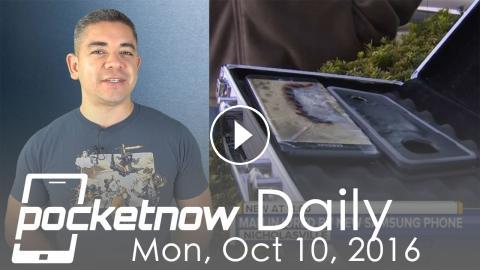