admin
- Swappa Gaming & more:
On Pocketnow Daily, Apple could increase its iPhone prices next year due to new taxes enforced by the US government. A new report also hints that we should expect four Galaxy S10 models instead of three. Some new patents and concept designs of LG's foldable phone have emerged showing us what the phone could look like. Project Fi will reportedly start supporting Samsung, Apple, OnePlus devices among others some time soon. We end today's show with Q3's results in global smartphone sales.
All this and more after the break.
Stories:
- Bad news for Apple and bad sales for iPhones as analysts and investors respond to Trump’s threat
- Report suggests at least four Galaxy S10 models coming. Yes, at least four!
- LG bendable smartphone described by patent filing
- Project Fi may accept iPhone and other Android phones soon
- Samsung still leads, Huawei gaining, Nokia growing in global smartphone shipments
#PocketnowDaily #iPhoneXS #GalaxyS10
Subscribe:
Follow us:
Graphics provided by: Motionvfx.com
About us:
Pocketnow has been a key source of mobile technology news and reviews since its establishment in 2000. With offices on three continents, Pocketnow offers round-the-clock coverage of the mobile technology landscape, from smartphones to tablets to wearables. We aim to be your number-one source for mobile tech news, reviews, comparisons, and commentary. If you love mobile as much as we do, be sure to subscribe!
[Video Title]
[Video URL]
Pocketnow 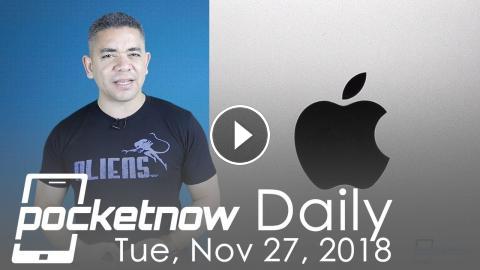 - Swappa Gaming & more:On Pocketnow Daily, Apple could increase its iPhone prices next year due to new taxes enforced by the US government. A new repo...