admin
T-shirts provided by RIPT. Learn more about it here:
Stories:
- T-Mobile’s LG V20 is heavily discounted again, this time from $770 to $480
- Samsung Galaxy S8 pre-orders said to open April 7, start shipping April 18, at least in Korea
- Behold, our clearest look yet at gray and black Samsung Galaxy S8, front and back
- Apple’s AR ‘paradigm shift’ to start with iPhone 8, smartglasses still ‘a ways off’
- Apple discreetly unveils new 9.7-inch iPad, red iPhone 7, iPad mini 4 and iPhone SE with more storage
- Android O developer preview now out for flashing only
Watch today's Pocketnow Daily as we talk about some of the recent deals you can find for the LG V20 on T-Mobile. Then we cover the pre-order probabilities and leaked renders of the Samsung Galaxy S8. Apple's Approach to AR is next as we hear that the iPhone 8 will play a major role. We then talk about Apple's launch of a new iPad, iPhone product Red, iPad mini 4 and updates to the iPhone SE. We end today's show with the hottest news as Google has just made Android O official.
All this and more after the break.
Subscribe:
About us:
Pocketnow has been a key source of mobile technology news and reviews since its establishment in 2000. With offices on three continents, Pocketnow offers round-the-clock coverage of the mobile technology landscape, from smartphones to tablets to wearables. We aim to be your number-one source for mobile tech news, reviews, comparisons, and commentary. If you love mobile as much as we do, be sure to subscribe!
Follow us: 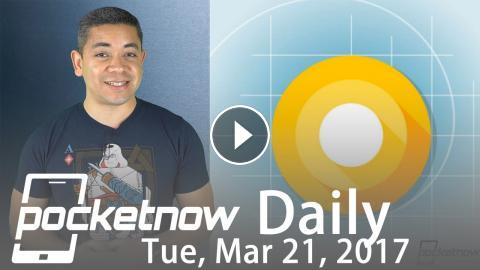