admin
Stories:
- Apple tapers its Back To School deals, now only for the Mac
- Google Play summer sale brings you games for as little as ten cents a piece
- Is this our first look at an iPhone 6S front panel?
- Galaxy Note 5 report attempts to shoot down auto-ejecting S Pen rumors
- Samsung and Apple dominate the smartphone market, though Samsung’s slightly declining, and Apple’s catching up
Watch today's Pocketnow Daily as we talk about Apple's new back to school deals, and how they underwhelm. Then we talk about some Google Play deals that also underwhelm for the most part. Then we talk about Apple as we see the first leaks of the iPhone 6s display. Then we move the spotlight to Samsung as the Galaxy Note 5 might not bring a special S Pen after all. We end today's show talking about Samsung and Apple, and their current market share dominance.
All this and more after the break.
Subscribe:
About us:
Pocketnow has been a key source of mobile technology news and reviews since its establishment in 2000. With offices on three continents, Pocketnow offers round-the-clock coverage of the mobile technology landscape, from smartphones to tablets to wearables. We aim to be your number-one source for mobile tech news, reviews, comparisons, and commentary. If you love mobile as much as we do, be sure to subscribe!
Follow us: 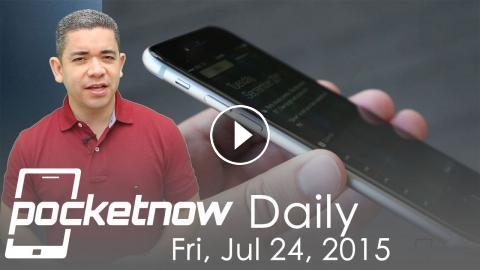 Stories:- Apple tapers its Back To School deals, now only for the Mac - Google Play summer sale brings you games for as little as ten cents a piece - ...