admin
Stories:
- Google introduces Google Maps Timeline to show you it records your every move
- Apple seeds beta 4 of iOS 9, OS X El Capitan, and watchOS 2 to developers
- Android 5.1 reaches Sony Xperia Z2 and Xperia Z3 family
- Xperia S60 and S70: two high-end Sony smartphones rumored before IFA 2015
- Apple Watch reportedly ate up almost all of Samsung’s market share
- Galaxy S6 Edge Plus and Galaxy Note 5 specs leaked by UAProf, complete with SD card support
Watch today's Pocketnow Daily as we talk about Google's introduction of Google Maps Timeline, and what it means for your privacy. Then we talk about Apple's launch of iOS 9 and OS X El Capitan public betas. Then we talk about Sony's launch of Android 5.1 for legacy Xperias, in addition to rumors of other flagship Xperias coming soon. Then we talk about the Apple Watch and its market dominance over others. We end today's show talking about the Galaxy Note 5 and Galaxy S6 Edge Plus specs.
All this and more after the break.

Subscribe:
About us:
Pocketnow has been a key source of mobile technology news and reviews since its establishment in 2000. With offices on three continents, Pocketnow offers round-the-clock coverage of the mobile technology landscape, from smartphones to tablets to wearables. We aim to be your number-one source for mobile tech news, reviews, comparisons, and commentary. If you love mobile as much as we do, be sure to subscribe!
Follow us: 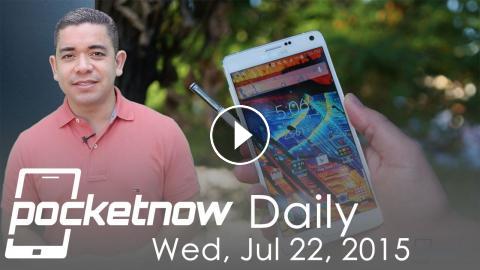