admin
Stories:
- Cyanogen OS-powered Lenovo ZUK Z1 officially goes on sale in Europe
- LG G4 is world’s first non-Nexus phone to officially score Android 6.0 Marshmallow
- Samsung and LG reportedly ramp up foldable smartphone display development
- Samsung spruces up Galaxy Note 5 with introduction of new color options
- The iPhone’s dominance in three graphs (and a bunch of murky numbers)
Watch today's Pocketnow Daily as we talk about the recent collaboration between Cyanogen OS and Lenovo. Then we talk about the LG G4, and who the device is already getting Android 6.0 Marshmallow. Samsung and LG follow with more rumors regarding smartphones with foldable displays. Then we discuss Samsung's new color options for the Galaxy Note 5. We end today's show talking about the iPhone's dominance in the US and China.
All this and more after the break.
Subscribe:
About us:
Pocketnow has been a key source of mobile technology news and reviews since its establishment in 2000. With offices on three continents, Pocketnow offers round-the-clock coverage of the mobile technology landscape, from smartphones to tablets to wearables. We aim to be your number-one source for mobile tech news, reviews, comparisons, and commentary. If you love mobile as much as we do, be sure to subscribe!
Follow us: 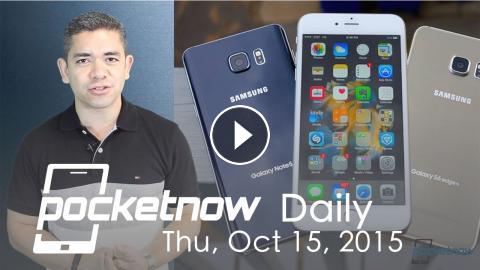