Arnia
From 1877 to 1896, the popularity of bicycles increased exponentially, and Boston was in on it from the start. The Boston Bicycle Club was the first in the nation, and the city's cyclists formed the nucleus of a new national organization, the League of American Wheelmen. The sport was becoming a craze, and Massachusetts had the largest per capita membership in the league in the 1890s and the largest percentage of women members.

At the end of the nineteenth century, cycling's popularity surged in the Boston area, but by 1900, the trend faded. Within the next few decades, automobiles became commonplace and roads were refashioned to serve them. Bicycling witnessed a renaissance in the 1970s as concerns over physical and environmental health coalesced.

Lorenz J. Finison explores the remarkable rise of Boston cycling through the lives of several participants, including Kittie Knox, a biracial twenty-year-old seamstress who challenged the color line; Mary Sargent Hopkins, a self-proclaimed expert on women's cycling and publisher of The Wheelwoman; and Abbot Bassett, a longtime secretary of the League of American Wheelman and a vocal cycling advocate for forty years. He reveals the challenges facing these riders, whether cycling for recreation or racing, in a time of segregation, increased immigration, and debates about the rights of women.

Get the book here: https://goo.gle/2QDatlf. 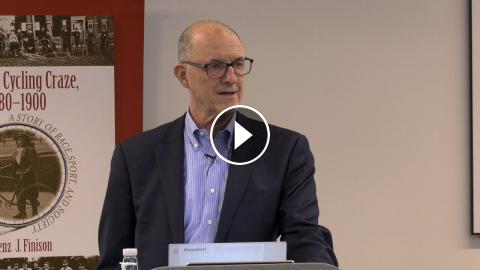 From 1877 to 1896, the popularity of bicycles increased exponentially, and Boston was in on it from the start. The Boston Bicycle Club was the first i...