admin
Stories:
- HTC One M9 purchases now come with free $100 Google Play credit
- Galaxy Note 5 and S6 Edge+ seem to sell faster than their predecessors
- Is the Galaxy Note 5 S Pen too easy to insert backwards – and get stuck?
- Chinese carrier leaks give some iPhone 6s rumors credibility and kills others
- New Android Wear offerings from various OEMs expected for IFA
- Early retailer listing for new Moto 360 gives us peek into pricing
Watch today's Pocketnow Daily as we talk about the recent deals for the HTC One M9 if you buy one now. Then we talk about the Galaxy Note 5 and Galaxy S6 Edge+ sales for the first couple of months, in addition to the S Pen complaints when placed backwards. Then we talk about the iPhone 6s, and how Chinese carriers are tipping details. We then follow with Android Wear and the new offerings we should expect for IFA. We end today's show talking about the future Moto 360, and its price points.
All this and more after the break.
Subscribe:
About us:
Pocketnow has been a key source of mobile technology news and reviews since its establishment in 2000. With offices on three continents, Pocketnow offers round-the-clock coverage of the mobile technology landscape, from smartphones to tablets to wearables. We aim to be your number-one source for mobile tech news, reviews, comparisons, and commentary. If you love mobile as much as we do, be sure to subscribe!
Follow us: 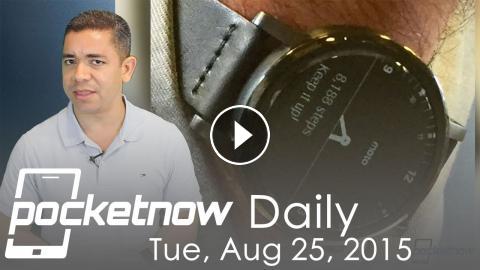