admin
Renault Oura (winning entry)
Lily Saporta Tagiuri/ Evgeniya Chernykh / Zhenyou Gao
The Renault Oura is a vehicular “suit”that gives the wearer/rider the feeling of weightlessly flying through a cityscape while still on the road. As autonomous technologies have the potential to eliminate collisions, it is possible to radically reduce the physicality of a vehicle designed to absorb impact. The intrinsic safety of this autonomous technology allows us to strip the car of it’s protective structure as well as its driver-centric componentry, resulting in a massively reduced flyweight vehicle. In densely populated city spaces the requirement for compact, flexible, and sustainable transportation is a primary interest addressed by this proposal.
Inspired by an image of a ballet dancer lifting their partner, the wearer/rider is gracefully held and supported by a flexible structure of woven steel, carbon fibre and silicone; suspended – seemingly weightlessly –between spherical wheels driven by electric motors, and stabilised by an array of inbuilt gyroscopes. Pivots around the rider’s waist allows them unrestricted movement whilst in motion, offering the ability to shift from a fully reclining to gliding position as desired.
The best features of an information-rich vehicle interior are amplified in Oura by use of an interactive virtual reality(VR) display within the helmet’s visor. With far more options and flexibility available than ever before, this virtual interior incorporates a sound system, safety interfacing, infotainment, work, and physical activity interfaces. Through this VR interface, the user may switch between manual driving mode and autonomous “glide” for full freedom whilst in transit.
With Renault Oura, nothing stands between the wearer and the road ahead. 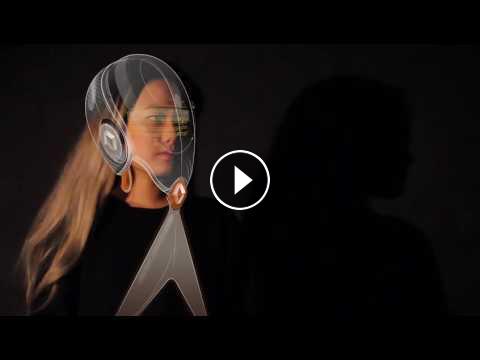