It's difficult to say what's felt longer: The absence of the Toyota Supra from the United States or the anticipation of the new one's arrival. Regardless, both clocks stop today as we arrive at Summit Point Motorsports Park in West Virginia to drive the 2020 Toyota GR Supra.

Anticipation, Thy Name Is Supra
Twenty-one years after the last Supra vacated American dealerships, Toyota has unveiled an all-new model. The 2020 Toyota GR Supra is a two-seater sports car designed to take on such luminaries as the Audi TT and Porsche Cayman, and it's engineered with more than a little help from BMW. Peel away the bespoke bodywork, and you'll discover the guts of the new 2019 BMW Z4, including the engine and gearbox. The new Supra is thus a curious mix of German and Japanese parentage, but Toyota is adamant that it will have its own distinct character.

Japanese Styling ...
The styling takes inspiration from both the iconic Toyota 2000GT of 1967 and the fourth-generation Supra introduced in 1993. It's not what you'd call elegant, but it is distinctive and, to our eyes at least, unmistakably Japanese — even if it was actually designed at Toyota's studio in California. In keeping with its sporting pretensions, there are some extroverted color choices, although we're particularly fond of the matte gray, officially named Phantom Matte Gray.
Inside, the two-seater cockpit focuses on the driver. There's the now inevitable central infotainment screen for most of the functionality — measuring 6.5 or 8.8 inches depending on your choice of trim — but the view forward is refreshingly simple. The switchgear in the center of the car is mainly BMW, though the instrument panel is bespoke. Attention focuses, Porsche-style, on a central rev counter with a gearshift indicator. The trunk is accessed via the rear hatch and promises enough luggage space for a weekend away.

... Meets German Engineering
The oily bits come from BMW, which is surely no bad thing. The 3.0-liter turbocharged six-cylinder engine — an inline-six, in keeping with the heritage of both BMW and the Supra — produces 335 horsepower and 365 pound-feet of torque. It's mated to an eight-speed automatic gearbox with sequential, flappy-paddle shifters mounted behind the steering wheel. This combination, a staple of BMW's gargantuan model range, should offer an appealing mix of smooth operation and strong performance. It won't be slow — Toyota is predicting 0-60 mph in just 4.1 seconds when using the launch control function, with the top speed limited to 155 mph.
Two other BMW traditions are also present and correct — rear-wheel drive and a 50-50 weight distribution. Both should serve to enhance the Supra's sporting appeal. We've already driven the Z4 and found it a captivating companion on both road and track. The BMW is a roadster, though, while the Supra is only available as a coupe, and Toyota's engineers have developed their own tune for the suspension, stability control and active differential.
The Supra's adaptive suspension can be changed on the fly by selecting between driving modes — Normal and Sport. The latter enhances the throttle response, adds weight to the steering, quickens the gear changes, adjusts the suspension damping, and tweaks the stability control system to give you more scope to play. Toyota expects at least some Supra customers to take to the track.

Toyota is keen to emphasize that the Supra is a usable everyday car. As you'd expect at this $50K price point, such features as dual-zone climate control, keyless entry and power-folding mirrors are standard, with a comprehensive lineup of passive and active safety equipment, including automatic emergency braking and a lane departure warning with steering assist.
Those seeking more luxury can upgrade to the Premium model for an additional $4,000, which features a larger (8.8-inch) touchscreen display with improved telematics including Apple CarPlay, a 12-speaker JBL audio system, wireless phone charging and a head-up display system. Premium buyers will also get to park their derrieres on heated, leather-wrapped chairs, replacing the faux suede used in the standard car.
The first 1,500 cars off the boat, though, will be so-called "Launch Edition" models, priced at $55,250 and available in white, red or black.

PRICE:
The Supra reaches showrooms this summer, priced from $49,990, and will face some impressive competition, not least from the Audi TT and Porsche Cayman. But, on paper, it would look to be a fair fight. We'll find out for sure when we drive the 2020 Toyota Supra in the near future.
Read More https://www.edmunds.com/toyota/supra/ 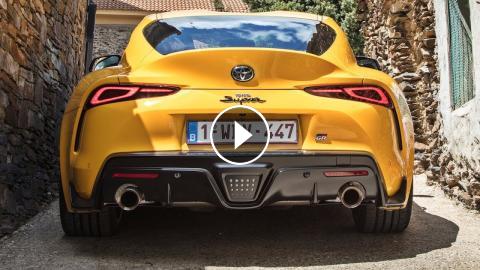