admin
Here are 10 of the most expensive fruits in the world.


Sure fruit is awesome, packed with all sorts of vitamins, antioxidants, and, of course, lip-smacking flavor.

Depending upon season and type, it's also pretty reasonably priced. Well, most of it is, anyway.

There are a few out there that could put a dent in even particularly lush grocery budgets.

Here are 10 of the most expensive fruits in the world.

Number 10. Densuke watermelon. Praised for its unique sweetness, this melon also has a very distinctive look. All black and lacking stripes, this beauty is definitely a grocery store stand-out. At its price point, it should be. In 2008 a 17-pounder sold at auction for 61 hundred dollars.

Number 9. Pineapples from the Lost Gardens of Heligan. Thank goodness pineapples have thick skins, because these ones are grown under straw, horse urine, and manure. To be fair, they hail from chilly England, so extreme measures are warranted. They're given to staff as gifts, but their estimated value is 16 hundred dollars.

Number 8. Yubari King Melon. A serious amount of effort goes into making sure that these cantaloupes are perfect. Each vine is trimmed to limit its yield to one. Once sprouted, each melon is given a little hat to protect it from the sun. When picked the stems are trimmed to a tidy 'T' shape. One ideal specimen pair fetched around 23 thousand dollars at auction.

Number 7. Taiyo-no-Tamago Mangoes. The going rate for these beauties is 3 thousand dollars. To be fair, the price is for a box that includes 2. To earn the special distinction, the individual fruits must weigh at least 12 ounces and be high in sugar.

Number 6. Ruby Roman grapes. They're perfectly round, extra sweet, and about the size of a ping pong ball, all of which are apparently extremely desirable qualities. People are willing to pay in excess of 4 thousand dollars to get their hands on a bunch.

Number 5. Square watermelons. Sure, it sounds cool, but is it over 800 dollars worth of awesome? That's the price some Russians have been known to pay for the Japanese melons. To achieve the unique shape, farmers grow the fruit in plastic containers.

Number 4. Dekopon citrus. A cross between a mandarin and an orange, the membranes between the sections are known for their thinness and melt-in-your mouth quality. The flavor keeps happy customers combing back as well, as they hit an ideal balance between sweet and tart. A pack of 6 runs around 80 dollars.

Number 3. Sekai-ichi apples. The making of the 21-dollar apple -- that's a piece, not per pound -- is far from left to nature. Fields are hand pollinated and each apple is washed in honey and hand stamped.

Number 2. Sembikiya Queen strawberries. Named for the swanky fruit store in Tokyo that sells them, each box of twelve is hand selected and perfectly matched. Even with a price tag of about 85 dollars, the retailer rings up at least 50 units a day.

Number 1. Buddha-shaped pears. Molds are placed on the pears as they grow from the trees, resulting in a piece of fruit that looks much like a small, decorative statue. People don't seem to mind the 9-dollar price, and rush to buy them as soon as they're picked. 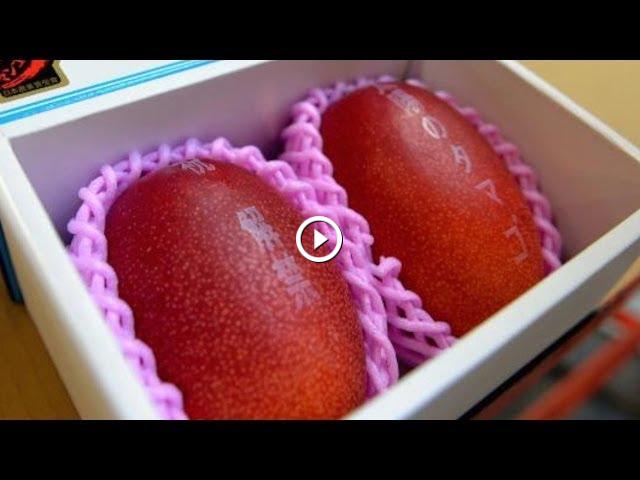 Here are 10 of the most expensive fruits in the world. Sure fruit is awesome, packed with all sorts of vitamins, antioxidants, and, of course, lip-sma...