admin
See The 9 Best Hand Coffee Grinders on Ezvid Wiki ►►
Fact #1. Coffee is centuries old. So, it should come as no surprise that we've needed grinders for our beans for a long time. Coffee plants first grew in Ethiopia. Ethiopians used to treat coffee more like a food than a beverage. They crushed the berries and wrapped them in some sort of fat to eat as a snack. This was almost like the earliest version of energy bars. At the time, they used a simple mortar and pestle to grind their beans.
Fact #2. Coffee grinders rely on the technology of the mill, which the Greeks created around 1350 BCE. Around the 15th century, the Turkish people invented the spice grinder, which people also used to grind up coffee beans. In 1665, a British man claimed to have created the first mill specifically designed for grinding coffee.
Fact #3. In a world where everything is going electric, it might seem like a logical step to get an electric grinder. But hand coffee grinders still have their merits. Electric grinders, while fast and efficient, are very loud. You likely want to make your coffee first thing in the morning. If you live with others, they may not appreciate your electric grinder going on at 7 A.M. Hand models boast a much quieter operation.
Fact #4. Hand coffee grinders are also far more portable than electric ones. If you like to camp, you probably won't find an outlet in a tree. You don't need electricity to get fresh coffee grounds from your hand unit. They also tend to be lighter and easier to pack then their electric counterparts.
Fact #5. These are very simple machines. They don't have all the parts of electric ones, which makes them more durable. Manual units consist of just a hopper for the beans, burrs to grind those beans, and a chamber to catch the grounds. This makes them easy to disassemble, clean, and put back together. 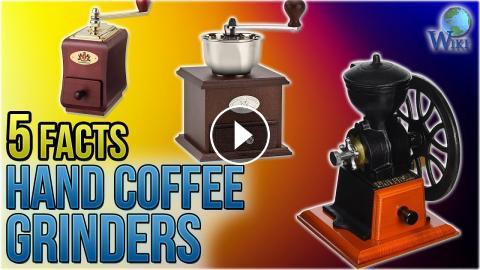 See The 9 Best Hand Coffee Grinders on Ezvid Wiki ►► Fact #1. Coffee is centuries old. So, it should come as no surprise that we've needed grinders fo...