admin
Stories:
- Sony launches “super mid-range” Xperia M5, Xperia C5 Ultra with high-performance cameras
- Sony’s already looking forward to next launch event, sets date for IFA announcement
- German automakers snatch HERE from Nokia for $3 billion
- Apple might just follow Google into the world of MVNO cellular service
- More leaks prove thicker iPhone 6s and Force Touch mods
- Apple reportedly wants to reinvent voicemail by using Siri
Watch today's Pocketnow Daily as we talk about Sony's new Xperia C5 Ultra, Xperia M5, and its future announcements at IFA. Then we talk about how Nokia sells HERE services to German automakers. Apple follows with the rumors of a probable MVNO to compete with Google's Project Fi. Then we talk about the recent leaks of a thicker iPhone 6s, Force Touch, and a Taptic engine. We end today's show talking about Apple's probable voice mail integration to Siri with iOS 10.
All this and more after the break.
Subscribe:
About us:
Pocketnow has been a key source of mobile technology news and reviews since its establishment in 2000. With offices on three continents, Pocketnow offers round-the-clock coverage of the mobile technology landscape, from smartphones to tablets to wearables. We aim to be your number-one source for mobile tech news, reviews, comparisons, and commentary. If you love mobile as much as we do, be sure to subscribe!
Follow us: 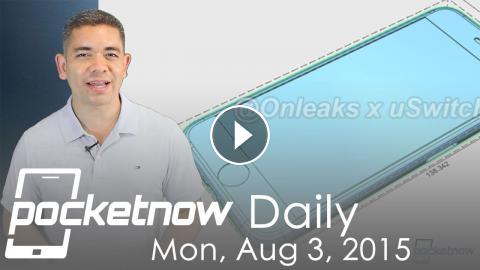