admin
Read more:
Stories:
- Apple reportedly buys eye tracking-specialized company to help with AR development
- A teaser after a teaser: vivo X9s should go public July 6
- Next-gen Qualcomm Fingerprint Sensor for Display works under OLED screens, OEM tests kicking off soon
- Samsung lacks linguists and data as Bixby delays grow
Watch today's Pocketnow Daily as we talk bout the recent development where Apple has begun to invest seriously in AR hardware. Then we focus on the new Vivo X9s, as it seems that Apple and Samsung were defeated to the screen fingerprint scanner by this device. Qualcomm follows as we hear of its new processors, and also plans for screen fingerprint scanners by the end of this year. Samsung follows as we learn the reasons why Bixby is really struggling to find traction. We end today's show talking about the next iPhone X or 8, and the video on the dummy unit that emerged.
All this and more after the break.
Subscribe:
About us:
Pocketnow has been a key source of mobile technology news and reviews since its establishment in 2000. With offices on three continents, Pocketnow offers round-the-clock coverage of the mobile technology landscape, from smartphones to tablets to wearables. We aim to be your number-one source for mobile tech news, reviews, comparisons, and commentary. If you love mobile as much as we do, be sure to subscribe!
Follow us: 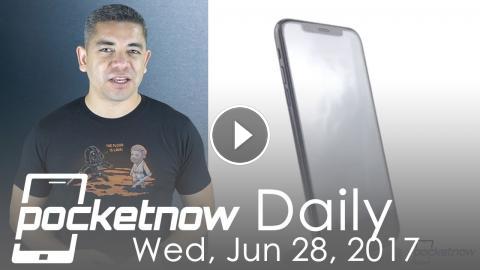