admin
Stories:
- Google shuts down rumors of Chrome OS merging with Android
- Google NYC retail store plans may finally be over
- Apple patents a way to bring Force Touch to keyboards
- Microsoft addresses Surface Book and Pro 4 bugs with firmware update
- iOS hackers claim a $1M bounty for pulling off a “zero day” jailbreak
Watch today's Pocketnow Daily as we talk about Google's confirmation of what we can expect from Chrome OS and Android. Then we talk about Google's plan for a possible NYC retail store. Apple follows as we learn of a new patent that could bring Force Touch technology to keyboards. Then we discuss the way Microsoft has addressed the screen issues on the Surface Book. We end today's show talking about how iOS hackers claimed $1M for hacking iOS 9 remotely.
All this and more after the break.
Subscribe:
About us:
Pocketnow has been a key source of mobile technology news and reviews since its establishment in 2000. With offices on three continents, Pocketnow offers round-the-clock coverage of the mobile technology landscape, from smartphones to tablets to wearables. We aim to be your number-one source for mobile tech news, reviews, comparisons, and commentary. If you love mobile as much as we do, be sure to subscribe!
Follow us: 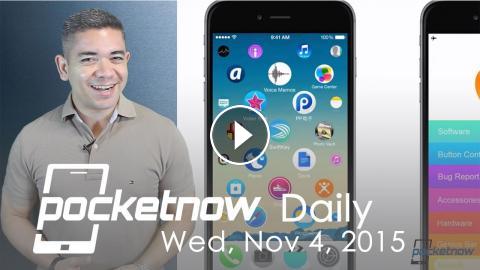 Stories:- Google shuts down rumors of Chrome OS merging with Android - Google NYC retail store plans may finally be over - Apple patents a way to brin...