admin
Read more:
Lee más en Español:
Stories:
- Amazon sells Moto G4 Prime Exclusive edition for lowest prices yet: $120 with 16GB storage, $130 in 32 gig version
- Google Glass Enterprise Edition is real, official and already in use at 50+ companies
- Starting at $99, the Mira Prism AR headset is kind of like a Samsung Gear VR for iPhones
- Samsung Galaxy S9 and S9+ tipped to match the screen size of the Galaxy S8 duo
- First credible LG V30 cases lend further plausibility to G6-similar rear design
Watch today's Pocketnow Daily as we talk about Amazon's recent deals on the Moto G4 and how you can get more storage for very little money. Google Glass follows as the Enterprise Edition has just made its official appearance. Then we focus on Mira Prism AR, and how it brings Augmented Reality in a more affordable way to iPhone users. Then we talk about the Samsung Galaxy S9 and Galaxy S9+ and the screen size options we should expect. We end today's show talking about the LG V30 and the first credible case render leaks that show us its resemblance to the LG G6.
All this and more after the break.
Subscribe:
About us:
Pocketnow has been a key source of mobile technology news and reviews since its establishment in 2000. With offices on three continents, Pocketnow offers round-the-clock coverage of the mobile technology landscape, from smartphones to tablets to wearables. We aim to be your number-one source for mobile tech news, reviews, comparisons, and commentary. If you love mobile as much as we do, be sure to subscribe!
Follow us: 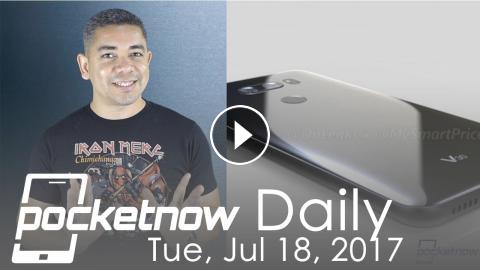