admin
Watch today's Pocketnow Daily as we talk about the rumors on the Nokia 9, and how the camera might go as far as the Lumia 1020 PureView. Then we talk about the rumored Google Pixel affordable variant for emerging countries. Then we talk about China and iPhone smuggling, and how drones had a way to get that done. Android Oreo follows as it finally reaches devices like the Galaxy Note 8 on T-Mobile and Galaxy S8 Active on AT&T. We end today's show talking about the deals you can find for the Huawei Mate 10 Pro.
All this and more after the break.
Stories:
- $150 off Huawei Mate 10 Pro through April 14
- Android Oreo officially rolls out to T-Mobile Galaxy Note 8 and AT&T Galaxy S8 Active
- Chinese authorities: Thousands of iPhones smuggled through drone operation
- ‘Mid-range’ Google Pixel phone focused on ‘markets such as India’ reportedly planned for summer
- Detailed list of Nokia 9 features surfaces online, but is it too good to be true?
Read more:
Lee más en Español:
Subscribe:
About us:
Pocketnow has been a key source of mobile technology news and reviews since its establishment in 2000. With offices on three continents, Pocketnow offers round-the-clock coverage of the mobile technology landscape, from smartphones to tablets to wearables. We aim to be your number-one source for mobile tech news, reviews, comparisons, and commentary. If you love mobile as much as we do, be sure to subscribe!
Follow us: 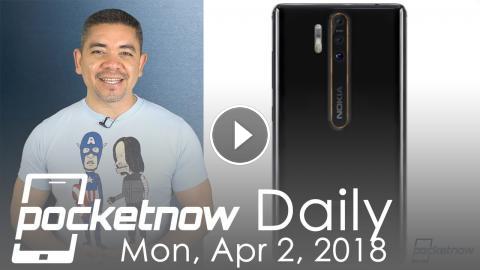 Watch today's Pocketnow Daily as we talk about the rumors on the Nokia 9, and how the camera might go as far as the Lumia 1020 PureView. Then we talk ...