admin
Stories:
- Best Buy kicks off another awesome Black Friday deal early: free $300 gift card with LG G5
- WhatsApp video calling support is rolling out to a billion+ users in the ‘coming days’
- Super Mario Run exclusively coming to iOS devices next month, full version priced at $10
- Unfazed by the Google Glass flop, Apple is reportedly considering its own AR smart glasses
- OnePlus 3T starts at $439 on November 22 with SD821, large battery, 16MP front cam
Watch today's Pocketnow Daily as we talk about the recent Black Friday Deals that Best Buy is offering to customers of the LG G5. Whatsapp follows as we see the company rolling out video calling. Super Mario Run follows as we get details on its launch date and price tag. Then we discuss some interesting rumors of Apple working on a probable competitor for Google Glass. We end today's show talking about the official announcement of the OnePlus 3T.
All this and more after the break.
Subscribe:
About us:
Pocketnow has been a key source of mobile technology news and reviews since its establishment in 2000. With offices on three continents, Pocketnow offers round-the-clock coverage of the mobile technology landscape, from smartphones to tablets to wearables. We aim to be your number-one source for mobile tech news, reviews, comparisons, and commentary. If you love mobile as much as we do, be sure to subscribe!
Follow us: 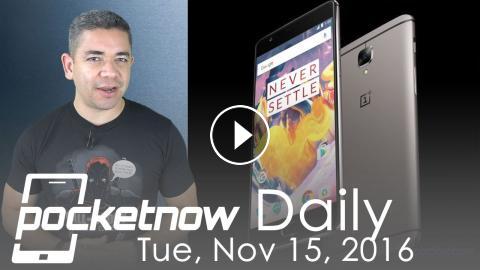