admin
Watch today's Pocketnow Daily as we talk about the the RED Hydrogen One, as we get details on specs and what the phone can do, this time by the company's founder. Then we talk about the Huawei P20 as the device might not make a launch at MWC. The iPhone X follows as it might not see a second year according to rumors. The Apple HomePod is next as it finally gets a launch date and pre-orders begin soon. We end today's show talking about Verizon's BOGO deals for some very hot devices, including the Google Pixel 2.
All this and more after the break.
Stories:
- Verizon BOGO deal on Galaxy S8, LG V30, Moto Z2 Force, Pixel 2 starts tomorrow
- Apple HomePod pre-orders begin on Friday, long overdue launch set for February 9
- First-gen iPhone X will not get year-on discount, but disappear instead
- New report backs up Galaxy S9 announcement date, rejects Huawei P20 MWC possibility
- RED Hydrogen One gets hyped up by company owner, specs and other info revealed
Read more:
Lee más en Español:
Subscribe:
About us:
Pocketnow has been a key source of mobile technology news and reviews since its establishment in 2000. With offices on three continents, Pocketnow offers round-the-clock coverage of the mobile technology landscape, from smartphones to tablets to wearables. We aim to be your number-one source for mobile tech news, reviews, comparisons, and commentary. If you love mobile as much as we do, be sure to subscribe!
Follow us: 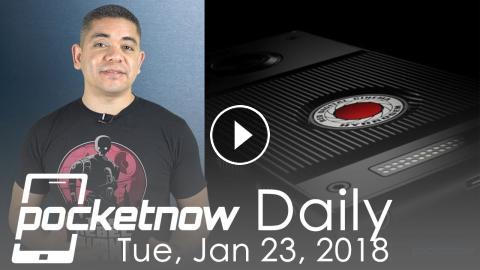 Watch today's Pocketnow Daily as we talk about the the RED Hydrogen One, as we get details on specs and what the phone can do, this time by the compan...