admin
Watch today's Pocketnow Daily as we talk about the rumored codename for the Samsung Galaxy S10, and what it means for the product. Then we talk about the iPhone X 2018, as we hear that Apple might not include dongles this time. The HTC U12+ follows as the company has just teased an announcement date. The RED Hydrongen One follows as the company has confirmed the reasons for its delay. We end today's show with the launch of the Nokia 6 in the US.
All this and more after the break.
Stories:
- The new Nokia 6 with Android One is now officially available in the US
- RED Hydrogen One delayed until August to incorporate 4-View cameras into base device
- Save the May 23 date for the official HTC U12+ announcement
- “No dongle this year” for iPhones as headphone jack hopes fade to Bluetooth
- Samsung Galaxy S10 codename revealed, 3D sensing struggles rumored
Subscribe:
Graphics provided by: Motionvfx.com
About us:
Pocketnow has been a key source of mobile technology news and reviews since its establishment in 2000. With offices on three continents, Pocketnow offers round-the-clock coverage of the mobile technology landscape, from smartphones to tablets to wearables. We aim to be your number-one source for mobile tech news, reviews, comparisons, and commentary. If you love mobile as much as we do, be sure to subscribe!
Follow us: 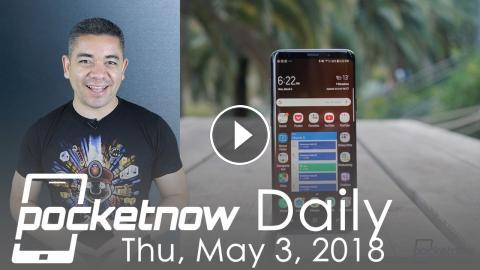 Watch today's Pocketnow Daily as we talk about the rumored codename for the Samsung Galaxy S10, and what it means for the product. Then we talk about ...