Following are some of the main concepts covered in this tutorial:

Station (STA): A computer or device with a wireless network interface.

SSID: Service Set identifier -- Name of wireless network
32 character unique name. SSID differentiates one WLAN from another, all access points and all devices attempting to connect to a specific WLAN must use the same SSID.

Ad Hoc Network: A temporary one made up of stations in mutual range. (Point to point or client to client. Only need wireless NIC)

Infrastructure network: One with one or more access points.

Carrier Sense Multiple Access with Collision Avoidance (CSMA/CA)
Before every data transmission
• Sender sends a Request to Send (RTS) frame containing the length of the transmission
• Receiver respond with a Clear to /Send (CTS) frame
• Sender sends the data
• Receiver sends an ACK; now another sender can send data
When sender doesn't get a CTS back, it assumes collision

WLAN Security
WEP. The wired Equivalent Privacy (WEP) is part of the IEEE 802.11 standard and uses 64 or 128 but RC4 encryption.

WPA2. Established in September 2004 by the Wi-Fi alliance certified interoperable version of the full 802.11i specification ratified in June 2004. 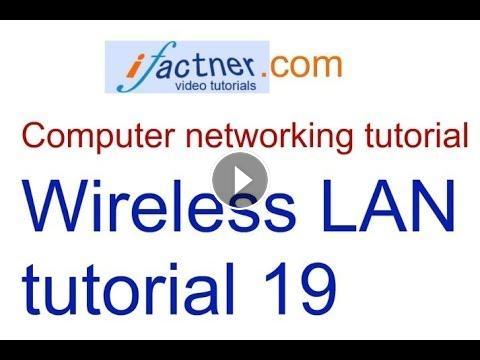