admin
Watch today's Pocketnow Daily as we talk about the fact that Apple has been discovered to already know about Bendgate and Touch Disease issues early in launch process of their the iPhone 6. Then we talk about the recent teaser that just emerged on the BlackBerry KEY2. The Vivo APEX follows as the concept seems to have evolved into a product according to leaks. Apple and Developers follow as we now see petitions for Cupertino to accept free trials on the App Store. We end today's show talking about the deals you can find for the LG G7 ThinQ.
All this and more after the break.
Stories:
- Sprint charging $792 for LG G7 ThinQ with BOGO lease offering
- BlackBerry KEY2, Ghost both rattling towards launches
- Developers petitioning for Apple to allow free trials for all apps
- Bezelless Vivo APEX concept is a concept no more, photographed packing 8GB RAM
- Apple internally knew about iPhone 6 bendgate, touch disease
Subscribe:
Graphics provided by: Motionvfx.com
About us:
Pocketnow has been a key source of mobile technology news and reviews since its establishment in 2000. With offices on three continents, Pocketnow offers round-the-clock coverage of the mobile technology landscape, from smartphones to tablets to wearables. We aim to be your number-one source for mobile tech news, reviews, comparisons, and commentary. If you love mobile as much as we do, be sure to subscribe!
Follow us: 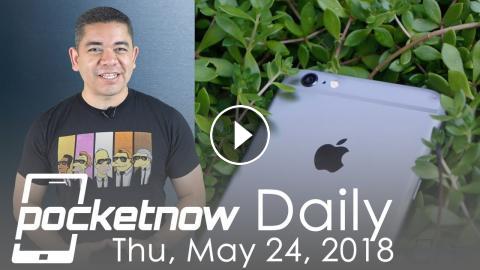 Watch today's Pocketnow Daily as we talk about the fact that Apple has been discovered to already know about Bendgate and Touch Disease issues early i...