admin
Watch today's Pocketnow Daily as we talk about the possibilities of having a full glass design for the Pixel 3XL along with some other design changes. Then we talk about recent rumors for the Sony Xperia XZ3 which is supposed to get great specifications. The Blackberry Key 2 was announced yesterday, and the phone is a real upgrade. Then we talk about Motorola's recent launch of their Moto Z3 Play mid-ranger. We end today's show talking about deals for AT&T's LG V35 ThinQ.
All this and more after the break.
Stories:
- Purported Google Pixel 3 XL prototype appears in crystal clear photographs
- Sony Xperia XZ3 could come early with a mix of XZ2 and XZ2 Premium specs
- BlackBerry KEY2 brings the Speed Key for two-touch multitasking
- Motorola Z3 Play Hands-on
- AT&T sends the LG V35 ThinQ on BOGO
Subscribe:
Graphics provided by: Motionvfx.com
About us:
Pocketnow has been a key source of mobile technology news and reviews since its establishment in 2000. With offices on three continents, Pocketnow offers round-the-clock coverage of the mobile technology landscape, from smartphones to tablets to wearables. We aim to be your number-one source for mobile tech news, reviews, comparisons, and commentary. If you love mobile as much as we do, be sure to subscribe!
Follow us: 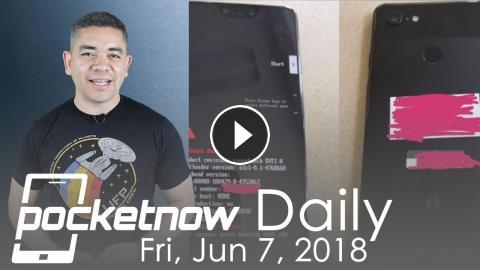 Watch today's Pocketnow Daily as we talk about the possibilities of having a full glass design for the Pixel 3XL along with some other design changes....