admin
Watch today's Pocketnow Daily as we talk about the fact that Tim Cook just spent an interview justifying the price for the new iPhone X. We also focus on the new BlackBerry Krypton and what seems to be the first leaked photo. Bose follows as we see the second generation of the QC35 headphones, now with support for the Google Assistant. Speaking of Google, we also discuss the partnership with HTC and what to expect. We end today's show talking about T-Mobile and its deals for the Moto Z2 Force.
All this and more after the break.
Stories:
- T-Mobile shaves $250 off Moto Z2 Force price, Insta-Share Projector still included
- Google buying HTC smartphone-related units for $1 billion
- Bose unveils world’s first Google Assistant headphones, as well as pricey AirPods contenders
- First purported BlackBerry Krypton images show upper half of swanky rear cover
- Tim Cook: $999 is “value price” for iPhone X because of EIPs and “discounts”
Read more:
Lee más en Español:
Subscribe:
About us:
Pocketnow has been a key source of mobile technology news and reviews since its establishment in 2000. With offices on three continents, Pocketnow offers round-the-clock coverage of the mobile technology landscape, from smartphones to tablets to wearables. We aim to be your number-one source for mobile tech news, reviews, comparisons, and commentary. If you love mobile as much as we do, be sure to subscribe!
Follow us: 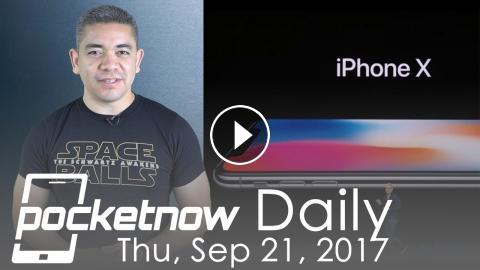 Watch today's Pocketnow Daily as we talk about the fact that Tim Cook just spent an interview justifying the price for the new iPhone X. We also focus...