admin
Stories:
- T-mobile skips Galaxy Note 5 pre-orders, sells and ships August 18; Galaxy S6 edge+ too
- Google announces OnHub, a pricey Wi-Fi router that claims ease of use
- LG planning some “Edge” models of its own? Company goes on trademark spree
- New LG smartwatch could be highest-res option yet
- Surveys claim that Apple Music is already on its way down
- More rumors point to iPhone 6s launch date
- Now it seems there’s also a 5-inch iPhone in the works
Watch today's Pocketnow Daily as we talk about T-Mobile's launch of the Galaxy Note 5 and Galaxy S6 Edge+. Then we talk about Google's announcement of OnHub, its smart Wi-Fi router. LG is next, first with trademarks that have to do with Edge devices, and followed by the rumors of a high-resolution smartwatch. Then we move the spotlight over to Apple Music, and its current sales performance. We end todays show talking about the iPhone 6s launch date, and the rumored 5-inch iPhone.
All this and more after the break.
Subscribe:
About us:
Pocketnow has been a key source of mobile technology news and reviews since its establishment in 2000. With offices on three continents, Pocketnow offers round-the-clock coverage of the mobile technology landscape, from smartphones to tablets to wearables. We aim to be your number-one source for mobile tech news, reviews, comparisons, and commentary. If you love mobile as much as we do, be sure to subscribe!
Follow us: 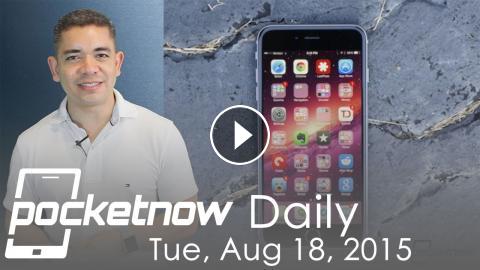