admin
Watch today's Pocketnow Daily as we talk about rumors for Apple's event this fall which tell us we should expect a refresh on products like the iPad, Mac Mini and other along with larger screen on the Apple Watch. Then we talk about new renders for the Galaxy Note 9 which show us the same device we've been seeing along with a possible release date which would be August 24. HTC will apparently go on with their block chain project 'Exodus' which will also be focused on gaming. The Unlocked variant of the LG G7 ThinQ is already available at B&H Photo, along with some deals for the Google Pixel 2 XL. We end today's show with Amazon Prime Day deals for the Honor View 10 and the Honor 7X.
All this and more after the break.
Stories:
- AirPower, new Apple Watches, iPad Pro and Mac mini expected this fall
-
- HTC Exodus will feature CryptoKitties and cost around $1,000
- Unlocked LG G7 ThinQ now available at B&H
- Honor View 10 and Honor 7X score discounts on Amazon Prime Day
Subscribe:
Graphics provided by: Motionvfx.com
About us:
Pocketnow has been a key source of mobile technology news and reviews since its establishment in 2000. With offices on three continents, Pocketnow offers round-the-clock coverage of the mobile technology landscape, from smartphones to tablets to wearables. We aim to be your number-one source for mobile tech news, reviews, comparisons, and commentary. If you love mobile as much as we do, be sure to subscribe!
Follow us: 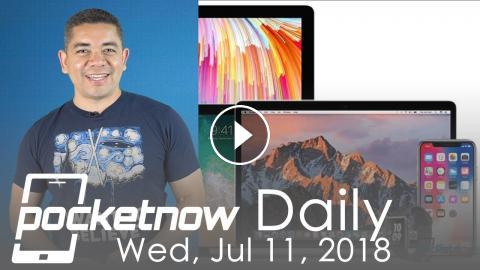 Watch today's Pocketnow Daily as we talk about rumors for Apple's event this fall which tell us we should expect a refresh on products like the iPad, ...