admin
Stories:
- What the hell is the Turing Phone doing? Drops Android for Sailfish OS
- Apple March event rumors zero in on specific date
- Apple Watch owner successfully sues over cracked screen
- Galaxy S7 edge pops up prematurely on Samsung dev site
- Galaxy S7 may still have camera bump, but only half as high as on GS6
Watch today's Pocketnow Daily as we talk about the future of the Turing Phone, if there is any to document. Apple follows with rumors on when to expect the March event. Then we discuss the Apple Watch, and how a customer just won a lawsuit against Cupertino over its durability. Then we talk about the Samsung Galaxy S7 Edge, and everything the company already leaks in its dev site. We end today's show again, with the Galaxy S7, though this time with other design improvements.
All this and more after the break.
Subscribe:
About us:
Pocketnow has been a key source of mobile technology news and reviews since its establishment in 2000. With offices on three continents, Pocketnow offers round-the-clock coverage of the mobile technology landscape, from smartphones to tablets to wearables. We aim to be your number-one source for mobile tech news, reviews, comparisons, and commentary. If you love mobile as much as we do, be sure to subscribe!
Follow us: 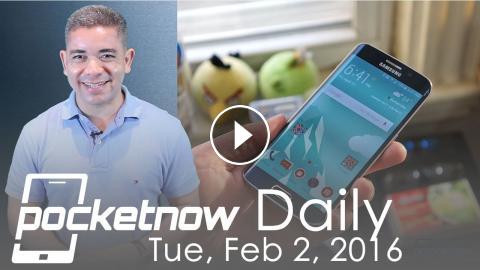 Stories:- What the hell is the Turing Phone doing? Drops Android for Sailfish OS - Apple March event rumors zero in on specific date - Apple Watch own...