admin
Stories:
- Amazon UK has Sony Xperia X pre-orders as well as ones for Xperia XA
- Microsoft reaffirms its Windows 10 Mobile commitment to insiders
- Latest Surface Phone rumors zero in on timeline, security and productivity focus
- Nintendo confirms two upcoming mobile games, as Miitomo reaches 10 million users
- Upcoming Samsung wearables leak: Gear Fit 2 wristband, Gear IconX earbuds
- Moto X by Lenovo may have been benchmarked
Watch today's Pocketnow Daily as we talk about the recent Sony Xperia X pre-orders in the UK. Then Microsoft follows as the company reaffirms that it is committed to Windows 10 Mobile, again. We even hear about the possibility of a Surface Phone for early next year, yes, again. Nintendo follows as there is talks about two new mobile games coming soon. Then we discuss the recent leaks of a possible Gear Fit, in addition to some IonX earbuds. We end today's show talking about the new Moto X by Lenovo, and its possible specs.
All this and more after the break.
Subscribe:
About us:
Pocketnow has been a key source of mobile technology news and reviews since its establishment in 2000. With offices on three continents, Pocketnow offers round-the-clock coverage of the mobile technology landscape, from smartphones to tablets to wearables. We aim to be your number-one source for mobile tech news, reviews, comparisons, and commentary. If you love mobile as much as we do, be sure to subscribe!
Follow us: 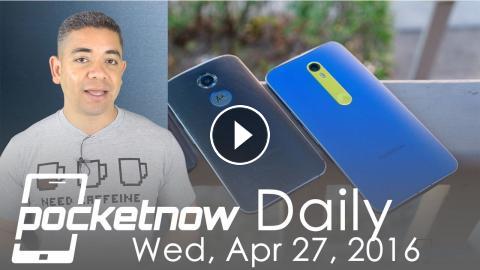