admin
T-shirts provided by RIPT. Learn more about it here:
Stories:
- Even more video providers join T-Mobile Binge On in 6th expansion wave
- Sony finally slaps PlayStation VR with a precise release date: October 13
- Global Samsung Galaxy S7 sales tipped to hit 25 million milestone this month
- Slide to Unlock replaced with Press Home to Unlock on iOS 10
- iOS 10 overtime: uninstalling default apps, device compatibility
- OnePlus 3 launches in The Loop with sales for everyone right now
Watch today's Pocketnow Daily as we talk about the recent channels added to T-Mobile's Binge On. Sony follows as we learn of the company's plans to launch PlayStation VR. Then we talk about the Samsung Galaxy S7, and the company's sales so far. Some of the recent iOS 10 tricks have also emerged as the news that follow. We end today's show talking about the OnePlus 3 and everything you need to know from its launch.
All this and more after the break.
Subscribe:
About us:
Pocketnow has been a key source of mobile technology news and reviews since its establishment in 2000. With offices on three continents, Pocketnow offers round-the-clock coverage of the mobile technology landscape, from smartphones to tablets to wearables. We aim to be your number-one source for mobile tech news, reviews, comparisons, and commentary. If you love mobile as much as we do, be sure to subscribe!
Follow us: 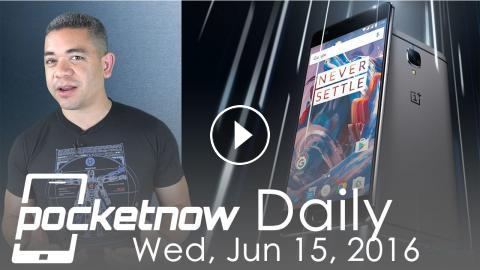