Hey, my yellow bro!
There are so many different smells on our planet! Did you know that the smells have an impact not just on the person, but also on his culture and traditions in general? In ancient cultures of India, in some tribes of Africa and South America, the influence of odors even on everyday life is very important, because the different smells are used in traditional rituals. For example, in black magic rituals in order to attract the evil spirits were often used harmful or poisonous substances with unpleasant odors. It is known that such sacrificial gifts as dried blood or red pepper were thrown into the fire especially to provoke a bad smell. Sounds crazy, huh?
Anyway, Our planet is really unique because of its variety of smells!
Just imagine that almost all the planets in the Solar System have only a few different smells on their surface, and some planets have only one smell and you may not like it at all! Do you want to know which planet of the Solar System smells the best, and where it is better not even to because of the disgusting smell - then get comfortable and get ready for a new space journey! 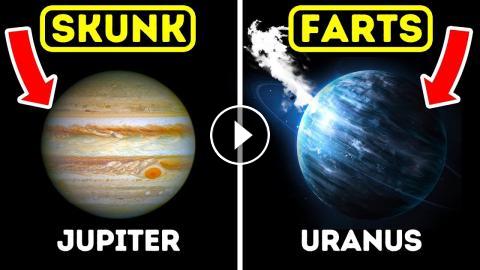 Be like SMART BANANA: https://goo.gl/JTfP6LWhat do the Solar System planets smell like?Hey, my yellow bro!There are so many different smells on our pl...