admin
T-shirts provided by RIPT. Learn more about it here:
Stories:
- Apple Music for Android finally ends beta tests to get proper release
- Benchmark lends credence to solid, not stellar Google Nexus Sailfish specs
- Samsung reveals iris scanner expansion roadmap with mid-range phones on it
- LG V20 gets an announcement date and venue: September 6, San Francisco
- And now, the working iPhone 7 prototype video
Watch today's Pocketnow Daily as we talk about Apple Music for Android, which just left Beta. Then we discuss some of the recent benchmarks discovered for the Google Nexus Sailfish smartphone from HTC. Samsung follows as we learn more about the roadmap of its Iris scanner. Then we talk about LG as we learn when to expect the LG V20. We end today's show talking about the iPhone 7 which just got discovered in a leaked video.
All this and more after the break.
Subscribe:
About us:
Pocketnow has been a key source of mobile technology news and reviews since its establishment in 2000. With offices on three continents, Pocketnow offers round-the-clock coverage of the mobile technology landscape, from smartphones to tablets to wearables. We aim to be your number-one source for mobile tech news, reviews, comparisons, and commentary. If you love mobile as much as we do, be sure to subscribe!
Follow us: 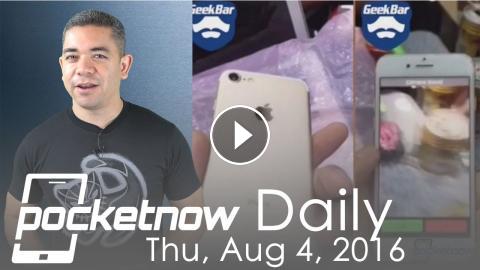