admin
Stories:
- AT&T picks up Samsung Gear S2 and LG Watch Urbane 2, NumberSync coming soon
- Amazon effectively removes Apple TV and Chromecast from its store
- Nexus 6P purchases now come with $50 savings if you also get the Huawei Watch
- Fitbit sales keep growing, as Apple Watch caters to a ‘different segment in the market’
- James Bond thinks the Sony Xperia Z4 is “not the best”
Watch today's Pocketnow Daily as we talk about AT&T's announcement of the Samsung Gear S2, in addition to the LG Watch Urbane 2nd Edition. Then it's all about Amazon's choice to ditch the Apple TV and Google Chromecast from its store on competing grounds. Then we discuss the recent deal if you buy a Google Nexus 6P along with a Huawei Watch. We then focus on the Fitbit, and how it keeps growing even with the Apple Watch existence. We end today's show talking about how James Bond decided to not use a Sony Xperia on Spectre.
All this and more after the break.
Subscribe:
About us:
Pocketnow has been a key source of mobile technology news and reviews since its establishment in 2000. With offices on three continents, Pocketnow offers round-the-clock coverage of the mobile technology landscape, from smartphones to tablets to wearables. We aim to be your number-one source for mobile tech news, reviews, comparisons, and commentary. If you love mobile as much as we do, be sure to subscribe!
Follow us: 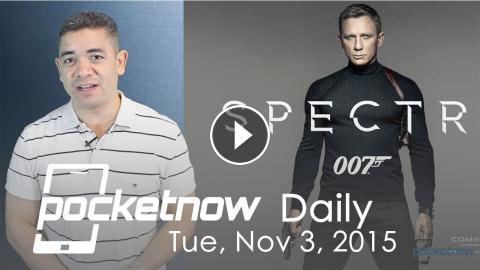