admin
Stories:
- Apple launches iOS 8.4 with Apple Music, and bug fixes
- Apple releases some major fixes with OS X 10.10.4
- Verizon makes Android 5.1 update for 2014 Moto X official
- Sprint HTC One M9 to get Android 5.1 update this week
- Lollipop for the Motorola Droid Turbo is finally landing
- Apple Watch patent may allow you to share files with a handshake
- Apple iPhone 6S hardware pics leak, appear to refute several recent rumors
- Samsung regains US smartphone leadership thanks to Galaxy S6
Watch today's Pocketnow Daily as we talk about Apple's launch of iOS 8.4, Apple Music, and a new version of OS X. We then talk about all the Android Lollipop updates that just arrived on different units in the US. We then talk about a new patent for the Apple Watch, which makes you take advantage of hand gestures. Apple follows with some leaks of the iPhone 6s chassis. We end today's show talking about Samsung's current market share in the US.
All this and more after the break.
Subscribe:
About us:
Pocketnow has been a key source of mobile technology news and reviews since its establishment in 2000. With offices on three continents, Pocketnow offers round-the-clock coverage of the mobile technology landscape, from smartphones to tablets to wearables. We aim to be your number-one source for mobile tech news, reviews, comparisons, and commentary. If you love mobile as much as we do, be sure to subscribe!
Follow us: 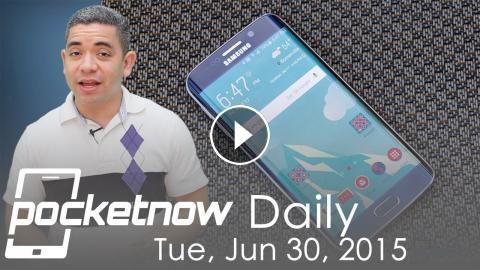