That planes can get their fuel tanks refilled while speeding through the sky is pretty remarkable, but there are a number of amazing things that occur in and around the process.
Here are 10 extraordinary facts about aerial refueling.
Number 10. It’s possible to fill up two planes at once, a feat many of today’s air tankers are capable of. An Airbus test tanker was able to top off a pair of F/A-18 fighter jets while traveling at altitudes ranging from 20 to 30 thousand feet. Also impressive is that the crafts were flying at speeds up to around 350 miles per hour.
Number 9. The practice is nothing new. It was successfully done for the first time in 1923. Though the line fed directly into the recipient’s tank, the fuel source was a handheld tank rather than the dedicated tanker crafts used today.
Number 8. There have been some serious accidents. One tragic event occurred in 1966 when a B-52G bomber headed home to North Carolina collided with a KC-135 supply craft during a refueling attempt near Spain. The accident claimed the lives of 7 crewmembers. 4 managed to parachute to safety.
Number 7. There have also been some unfortunate mishaps. A combination of turbulence and questionable skills resulted in the tearing apart of a fuel line apparatus. When the receiving Italian Air Force plane suddenly dropped back, the attachment mechanism broke off and fuel ended up being spewed into the air.
Number 6. Some tankers equipped with a telescoping boom are able to transfer fuel at rates up to 6 thousand pounds per minute.
Number 5. Operating a boom is a cool job. In the Air Force, the task of extending the fueling apparatus is a profession unto itself, and those lucky enough to be chosen for the position have some incredible built-in perks. Among them is an amazing view, as their area of the fueling craft is outfitted with a lot of large windows.
Number 4. In-flight refueling vessels aren’t always in the air. In 1958 two men set a reportedly still-standing record for flight endurance. The Cessna 172 they piloted was refilled from a land vehicle traveling at the plane’s speed. That system worked for nearly 65 days, at which time the pair decided that the plane had stayed in the air as long as – if not longer than – it should.
Number 3. High-speed crafts require high speed refuels. Clearly, planes can’t stop or even slow down significantly while they’re in the air, as doing so would cause them to fall out of the sky. Thus, it’s the job of the tanker to set a speed the recipient plane can match while extending and attaching the hose. The speed required varies, but can reach well over 300 miles per hour for fast jets.
Number 2. Unmanned aerial drones may soon be able to re-fuel in air. The Navy hopes to start running trials to test this operation on the X-47B jet. In mid-2014 Northrop Grumman Systems Corp. was awarded just over 63 million dollars to continue developing the aircraft for the Navy Unmanned Combat Air System program.
Number 1. There’s such a thing as stunt in-air fueling. Back in the mid 1960s three Naval planes linked together for a fuel transfer as they soared above the clouds. A photographer captured the rare configuration, which is sometimes lightheartedly referred to as a ‘daisy chain’.
What do you think is the most extraordinary thing about in-air refueling? 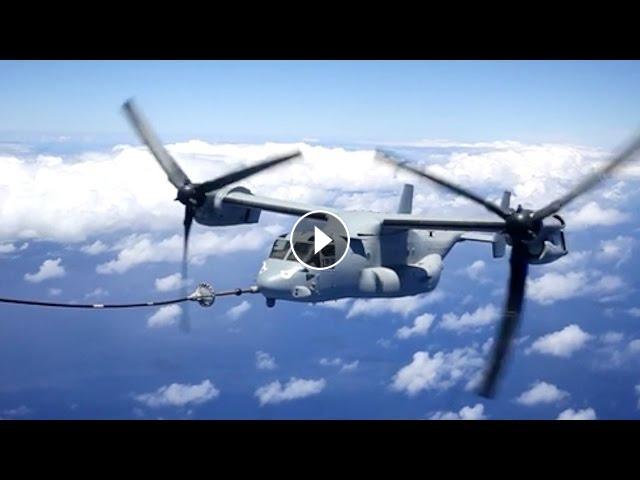 Here are 10 extraordinary facts about aerial refueling. That planes can get their fuel tanks refilled while speeding through the sky is pretty remarka...