admin
Here are 10 extraordinary facts about the USS Zumwalt.

The US Navy recently commissioned the USS Zumwalt or as some call it the 'Batman' ship, the first of three super stealthy guided missile destroyers designed to aid in land battles.

Number 9. On radar, it looks like a fishing boat. Thanks to it unique shape and careful interior arrangement of typically telltale battleship equipment, people on the lookout for gargantuan military vessels will, literally, never see it coming.

Number 8. The ship is aircraft friendly. Among those it is likely to house are Seahawk helicopters and Fire Scout UAVs.

Number 6. The captain’s name may cause confusion among some. The individual charged with commanding the Zumwalt is none other than Captain James Kirk. He is said to take the Star Trek-related questions often directed his way in stride.

Number 4. It runs with a relatively light crew. Typically, sailors on board will be limited to between roughly 150 and 175, which is modest for a ship of its size. As such, accommodations will be fairly generous, with even lower-ranking personnel being assigned to staterooms that house only 4. Plans also include a library and lounge areas.

Number 3. The ship is spacious enough to accommodate a forklift. One is used for bringing ammunition onto the ship and into an elevator that carries the rounds down to a well-concealed weapons station.

Number 2. It’s ready to help out a Navy SEAL team. Among the many extras stashed inside the ship are a few smaller boats, vessels that may come in very handy for the elite team.

Number 1. It’s really expensive. The estimated price hovers around $4 billion dollars. Those who’d like to pick up a destroyer of their own need not be discouraged, as opportunity may someday arise. The Navy has been known to sell decommissioned vessels for a fraction of the original sticker price.

What do you find most fascinating about the Zumwalt? 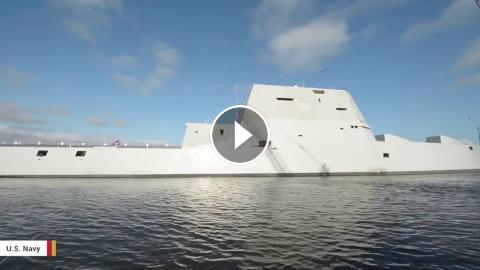 Here are 10 extraordinary facts about the USS Zumwalt. The US Navy recently commissioned the USS Zumwalt or as some call it the 'Batman' ship, the fir...