admin
T-shirts provided by RIPT. Learn more about it here:
Stories:
- AT&T is back in the Tuesday freebie game with official launch of Thanks program
- NBC has 85 hours of virtual reality Olympics content up its sleeve for Gear VR users
- Purported photo of TCL-made BlackBerry Neon, aka Hamburg, crops up online
- Here comes visual confirmation of the oft-rumored iris scanner on the Galaxy Note 7
- Check Google’s Snapchat today for Android N name [UPDATE: Nougat]
Watch today's Pocketnow Daily as we talk about the lauch of AT&T Thanks, the company's way to fight back to TMo Tuesdays. NBC follows as we learn about the company's efforts to bring VR to the Olympics. BlackBerry is next as some leaks of a TCL-made model emerge. Then we discuss the Samsung Galaxy Note 7 and the recent front panel leaks that have emerged. We end today's show talking about the final name of Android N, be it Android 7.0 Nougat.
All this and more after the break.
Subscribe:
About us:
Pocketnow has been a key source of mobile technology news and reviews since its establishment in 2000. With offices on three continents, Pocketnow offers round-the-clock coverage of the mobile technology landscape, from smartphones to tablets to wearables. We aim to be your number-one source for mobile tech news, reviews, comparisons, and commentary. If you love mobile as much as we do, be sure to subscribe!
Follow us: 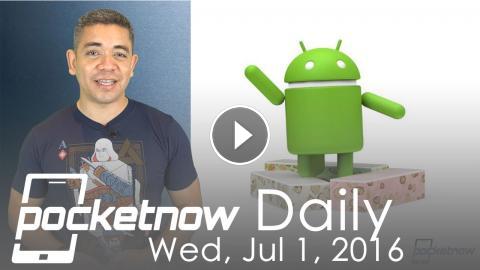 T-shirts provided by RIPT. Learn more about it here: Stories:- AT&T is back in the Tuesday freebie game with official launch of Thanks program - NBC h...