admin
Watch today's Pocketnow Daily as we talk about a new poster for the Galaxy Note 9 that was just leaked which features the S Pen in a different color. Then we talk about Apple, and the fact that they will allegedly delay the LCD iPhone 9 until November, to sell more of the two OLED variants coming out in September. It looks like the Galaxy Watch will be announced until IFA, LG is also launching two wearables according to trusted sources. Apple just brought new interesting updates to the Macbook Pro, including a 15'' variant with 6 cores and up to 4TB of SSD. We end today's show with the announcement of the Sony Xperia XA2 Plus.
All this and more after the break.
Stories:
- Bottom and rear of Galaxy Note 9 seen in leaked poster
- iPhone 9 will be delayed to let iPhone X sequels sell more
-
- MacBook Pro updated with 8th-gen Intel Core chipsets
- Sony Xperia XA2 Plus brings mid-range up with 2:1 display and 23MP camera
Subscribe:
Graphics provided by: Motionvfx.com
About us:
Pocketnow has been a key source of mobile technology news and reviews since its establishment in 2000. With offices on three continents, Pocketnow offers round-the-clock coverage of the mobile technology landscape, from smartphones to tablets to wearables. We aim to be your number-one source for mobile tech news, reviews, comparisons, and commentary. If you love mobile as much as we do, be sure to subscribe!
Follow us: 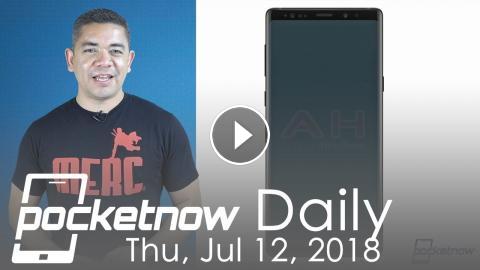 Watch today's Pocketnow Daily as we talk about a new poster for the Galaxy Note 9 that was just leaked which features the S Pen in a different color. ...