admin
Stories:
- New HTC J Butterfly goes official with One M9-besting specs
- Microsoft Hyperlapse brings smooth time-lapse videos to Windows and Android
- ASUS plans to introduce ZenWatch 2 at Computex next month
- Galaxy S6 Active shows up on official Samsung site
- Camera rumors suggest 12MP iPhone 6S sensor could come at a cost
Watch today's Pocketnow Daily as we talk about the launch of the HTC J Butterfly, and what it means for the HTC One M9. Microsoft is next as we learn of its new Hyperlapse service, and this time with no relation to the Instagram service. ASUS follows as we learn of its plans for the ZenWatch 2. Samsung is next as we get more credible reports on the Galaxy S6 Active, and boy it's ugly. We end today's show talking about the possible compromise in the new camera of the iPhone 6s
All this and more after the break.
Subscribe:
About us:
Pocketnow has been a key source of mobile technology news and reviews since its establishment in 2000. With offices on three continents, Pocketnow offers round-the-clock coverage of the mobile technology landscape, from smartphones to tablets to wearables. We aim to be your number-one source for mobile tech news, reviews, comparisons, and commentary. If you love mobile as much as we do, be sure to subscribe!
Follow us: 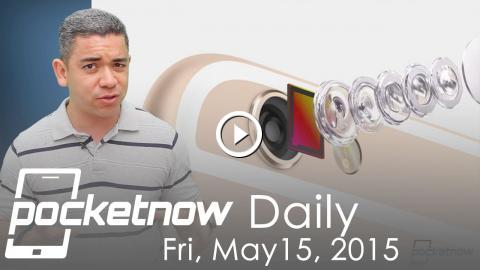